I’m Jonathan Turner, a chartered geologist working at RWM as Chief Geologist and more recently as Acting Technical Director. My background is in oil and gas exploration and I’ve been involved in major projects around the world.

During a recent work trip to Sweden, I visited several facilities related to geological disposal:

Visiting radioactive waste facilities in other countries is a valuable thing to do for us to get a sense of scale and learn lessons from other countries’ progress.

The SFR facility has been operating since 1988. In 2009 it was decided that Sweden’s deep repository for high-level waste will also be located near Forsmark, which is situated 60km from Stockholm.

The process of finding a suitable site had gone on for a number of years and several places were considered. Like Finland, Sweden is dominated by granites and other crystalline basement rocks. After geological analysis and work with the local communities, the choice was narrowed down to two communities: Forsmark and Oskarshamn.

After a lengthy technical evaluation, SKB finally announced in 2009 that the Geological Disposal Facility (GDF) would be located at Forsmark. The director of SKB declared “the rocks have spoken”, as if the greater suitability of Forsmark for hosting radioactive waste was a universal truth that took time to identify.

"The rocks have spoken" 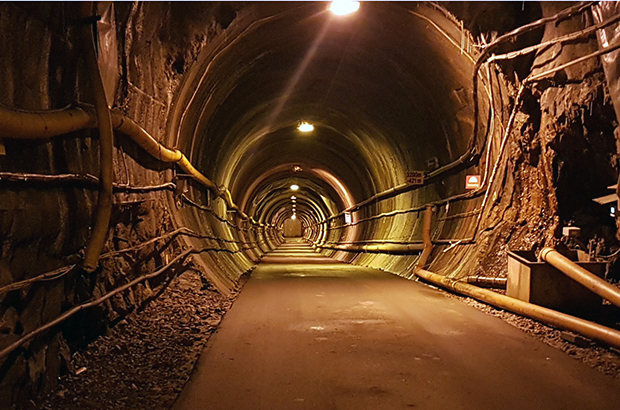 Sweden submitted its application for a licence to construct a deep repository for its spent fuel in 2011 which is still undergoing detailed review and scrutiny. In 2016, the safety regulators indicated their approval. The Swedish Environmental Court sits from this September with the outcome of the final licence application contingent on its report.

Local knowledge and networks have been key to SKB’s approach in building community relations and mutual trust.  A former Forsmark hairdresser, Inger Nordholm, is now a senior member of SKB’s community engagement team. She was recruited because of her personal knowledge of local traditions. Sometimes this was just small things, like a preference for small, low-key ‘coffee and sandwiches’ receptions.

I was particularly impressed by the breadth of the Swedish waste management programme while visiting the facilities near Oskarshamn. The canisterisation research lab at the dockside comprises a hangar-sized lab where they are conducting full-scale experiments on processes such as friction stir welding, x-ray and ultrasound analysis of quality of canister welds and the microcrystalline structure of copper.

I also heard about the work they were doing to understand the long-term behaviour of copper. This even included investigating a 400-year old cannon barrel from a submerged wreck. The end of the barrel was clearly less corroded as it had been buried in sulphur-rich mud.

In the underground facility at Äspö, another ‘experiment’ to be conducted in 2017 includes adaptation of a 70m-long tunnel boring machine with 5.5m diameter cutting head, mounted on caterpillar tracks and originally designed (then mothballed) by mining giant Rio Tinto Zinc.

The entire Swedish coast, especially the ’Stockholm archipelago’, is environmentally sensitive and a magnet for city-dwelling locals at the weekends and holidays. I saw a white-tailed fish eagle while we were driving near Forsmark and I heard about many other conservation sensitivities, a practical demonstration of how high the safety standards are behind the whole operation.

It was notable how the complex of buildings that comprise the Äspö Hard Rock Laboratory, including the mine shaft covering, have been designed sympathetically with respect to local building traditions – made of wood in a traditional architectural style.

I was really excited to see first-hand the progress being made in managing radioactive waste in Sweden and feel energised to think what can be achieved in the UK in the coming years.

Kaj is a geologist who has been involved for 25 years in the site selection and site investigation programme at SKB, the Swedish Nuclear Fuel and Waste Management Company implementing the Spent Fuel Repository construction in Forsmark, for the safe disposal of radioactive waste from Swedish nuclear power plants.

Kaj, what has been your highest point in the process?

There were lots of high points. The site investigation at Forsmark was a fantastic period for me, doing geology with lots of very clever people. I loved it, it was my most joyful period.

And your lowest point?

I’ve never had a low point, even when some communities decided not to participate in the site selection programme, as it was part of a democratic process, so I never saw it as a low point. Everything has ups and downs but we must accept that they are there as part of the job.

How does it feel to be part of something that will last for centuries, for long after you’ve gone?

It’s not what I would think about in a normal day’s work, I really appreciate being part of the work that SKB has done. The important thing is that we have arrived at a repository site that hopefully will be approved for construction in the near future. Achieving that in one’s working life is gold.

To find out more about geological disposal, or to get in touch with Radioactive Waste Management (RWM), visit our homepage.