As we work to decommission 17 of the UK's earliest nuclear sites, it's important to understand how people think we're doing and what they think would help us to improve. So we're using an independent, expert organisation to conduct this regular survey, to approach people interested in our work via telephone interviews and an online questionnaire. The responses help us understand what we need to focus on when engaging in the future.

As with our previous survey, we've looked at perceptions about how we:

Again, we've looked at the responses from 3 different groups: 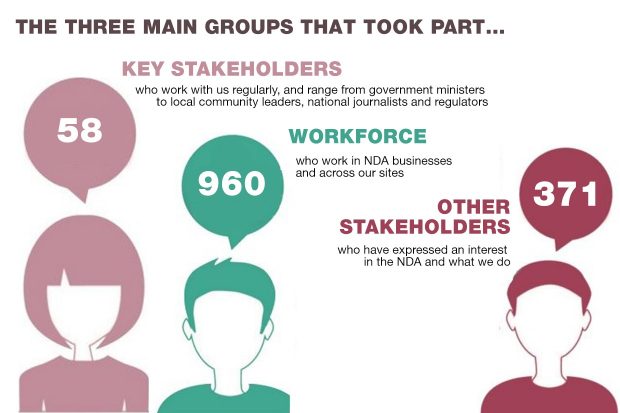 The smallest group of 58 respondents were individuals we know quite well, who tend to be fairly influential. They are generally actively interested in or regularly involved with NDA in various roles. They range from government ministers to local community leaders, national journalists and regulators. This group were contacted by telephone. A more in-depth analysis of their responses sought to understand the reasons for their answers in more detail.

The second workforce group covers employees from all our businesses that operate the nuclear sites and subsidiary organisations. Out of the 16,000 employed, 950 responded to the survey.

The third group was 371 people who have expressed an interest in NDA and our work. They accessed a link to the survey on our website, through our social media channels or subscription to our e-newsletter.

This is the second year we've asked the same groups of stakeholders the same questions, although we know that not exactly the same individuals answered our questions.

In looking at the results in the round, there's no substantial change in attitudes since the earlier survey of Summer 2017. While the workforces score the least positive, other stakeholders show very positive scores.

It's good to note that over two-thirds of all stakeholders surveyed thought that NDA maintains the highest standards of safety, security and environmental responsibility across its estate. This figure rises to 97% for key stakeholders. However, they are all more divided in their views on how we maintain sustainable communities (overall 50% supportive) and use best practice (42% supportive).

In engaging with stakeholders, there's again a disparity of views: 69% of key stakeholders believe we engage well while only 40% of the workforce agree.

Looking at the progress made by NDA towards its mission, 63% of key stakeholders feel progress has been good compared to 51% of the mailing list group and 38% of workforce respondents.

More detailed comments reveal positive areas, as well as where we could improve

Some positive comments from a number of those questioned include:

Areas where stakeholders told us we should do more:

There are no significant changes in attitudes and perceptions since the 2017 survey. The results appear broadly consistent. There are many positives:

On a personal note, as I move on to lead stakeholder engagement across the Magnox sites, as their Communications and Stakeholder Engagement Director, I'd like to say thank you to everyone I've worked with over the past 14 years with NDA. It's been fascinating to learn so much about the complex challenges of cleaning up our earliest nuclear sites, the technologies we're deploying and the skills we need for this important work.  From September, I'll be using all I've learnt to focus on the great work being undertaken across the Magnox sites.

I'm delighted to hand over my NDA role to someone who's already worked with so many of our stakeholders: John McNamara has joined NDA as Head of Stakeholder Relations. He has a wealth of nuclear industry knowledge after working with stakeholders in his earlier roles at EdF, NuGen, Nuclear Industry Association and British Energy. 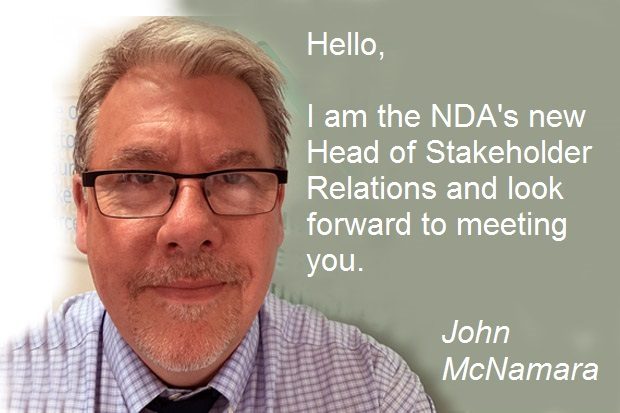 We welcome feedback on these survey results, so please share any comments below.