Sellafield’s mission is changing. As reprocessing operations end on site, our focus shifts to environmental clean-up and waste management.

As we prepare to take final fuel out of the world’s first commercial nuclear power station, we report on the current clean-up progress being made on the Sellafield site.

What is Calder Hall?

Calder Hall was the first industrial-scale nuclear power station in the world to be connected to the national grid. It consisted of 4 Magnox reactors, 2 turbine halls – and 4 cooling towers, which were demolished in September 2007.

Magnox is a type of nuclear power/production reactor that was designed to run on natural uranium with graphite as the moderator and carbon dioxide gas as the heat exchange coolant. It belongs to the wider class of gas-cooled reactors.

Calder Hall nuclear power station had four reactors, inside which a nuclear reaction took place. The heat generated by this reaction was used to turn water into steam. The steam was then transferred via insulated pipes into one of Calder Hall’s two turbine halls. Here the steam was used to turn a turbine, which drove a generator to produce electricity.

The global impact of Calder Hall

Calder Hall was the catalyst for the national and international nuclear relationships that endure today.

The design of Calder Hall was sold to both Italy and Japan. Both countries needed fuel to commission and operate their new stations, so a commercial vehicle was set up to provide the means to sell and transport the fuel.

Calder Hall? It is like the father of the nuclear industry.

This commercial vehicle was the forerunner to the Nuclear Decommissioning Authority’s International Nuclear Services organisation – with its specialist fleet of transport ships, operated by Pacific Nuclear Transport Ltd.

The decommissioning of Calder Hall

2003
Calder Hall closed down on 31 March 2003, after 47 years of service. On its closure, all 4 of the station’s reactors were full of fuel that would need to be treated in our Magnox reprocessing plant.

2008
In 2008, following the safe demolition of 2 of the station’s cooling towers, parts of the physical structure of the station were removed. 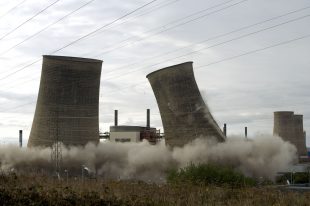 This process started with the removal of pipework that connected the heat exchangers to the four reactors. Each duct that was removed weighed 45 tonnes, and we commissioned one of the world’s biggest cranes to help dismantle the structures.

The external supporting steelwork and stairwells on each of the 16 heat exchangers were also dismantled. The steelwork around each weighed approximately 340 tonnes and, wherever possible, the material was recycled.

We stripped the material from Calder’s heat exchangers, turbine halls and associated buildings.

In all, 2,300 tonnes of asbestos were removed in 5 years - making it the largest asbestos removal project in Europe at the time.

The work to transfer 40,000 fuel rods from the station’s 4 reactors to the Fuel Handling Plant began.

One of Calder Hall’s reactors was emptied of fuel, and we reported that the remaining 3 reactors were on track to be emptied by 2019.

We are preparing to take final fuel out of the world’s first commercial nuclear power station, after 47 years of operation.

Once Calder Hall's reactors are empty – and the initial post-operational clean out work has been completed – the world's first commercial nuclear power station will not pose a nuclear or radiological risk or hazard.

The Calder Hall site will then enter a period of interim care and maintenance, allowing us to concentrate our resources on reducing risk elsewhere on the Sellafield site.

Our current plans indicate that by 2027, only the 4 reactor buildings will be left of the original Calder Hall station.

The reactor buildings will be dismantled to the point where only the concrete bio-shield that contains the reactor core remains.

This ‘safestore’ principle is already in use for reactors in France, Germany, Italy, Spain and the USA, as well as for the other Magnox reactors in the UK.